Gabardine Roses. Tortured vines. The sun has been hiding all this time. Hotdog has done it again, my sartorial darlings. They have two new releases out at events this month, and both are exquisite. The first—and more traditionally masculine—release is the Respectable Suit, at The Men’s Dept. Containing one male and one female fit (no body-specific rigs; these suits are skinny, so don’t expect them to showcase those Gianni muscles!) they come in multiple packs, with both plain and striped options. (As per usual, I fatpacked both outfits, which allows me to mix and match). 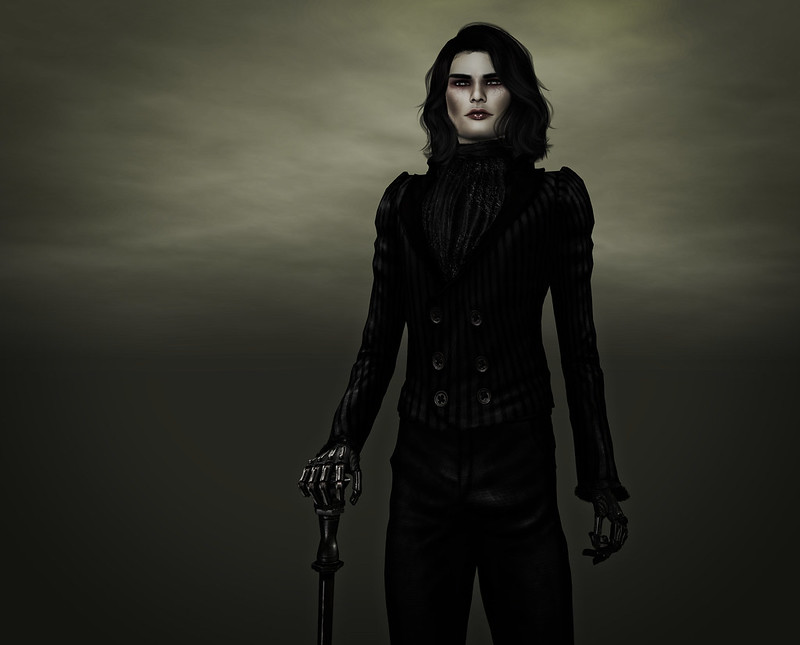 This deserved full-on Byronic-Gothic black, of course, and a Windlight mood to match it. Both of these looks feature the SK3L3T0 Prosthetic Arms and the Bismuth Cane, by ContraptioN. There is an additional AO for the cane, also from ContraptioN—somewhat pricey at L$2000, but worth it—from which all the poses in this post ensue.

The underlying look is BOM, making use of some of the ancient system skin and makeup layers that I’ve been dredging from the sludgy depths of my inventory lately. Skin by Tableau Vivant, makeup by Pin Me Down, lipstick by M.O.C.K, and additional new BOM veins from Izzie’s. And—with the use of an eye alpha—I can still wear these applier eyes from Madame Noir. 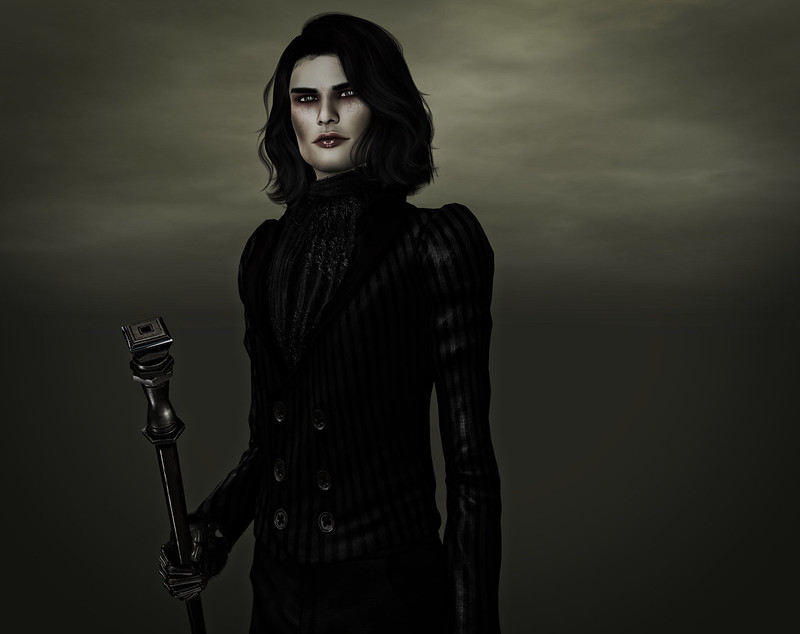 Credits for the above look

The second look is what had me shrieking with delight. This, my sartorial darlings, is the Respectable Dress, by Hotdog for Anthem event. Again, it’s unisex, with one male and one female fit. And oh dear lord, do I love it. Together with the look above, I’m getting hints of a new persona for Skell (alongside the Rocker and the Gentleman Bastard) so I’m going to mull this one over a bit. 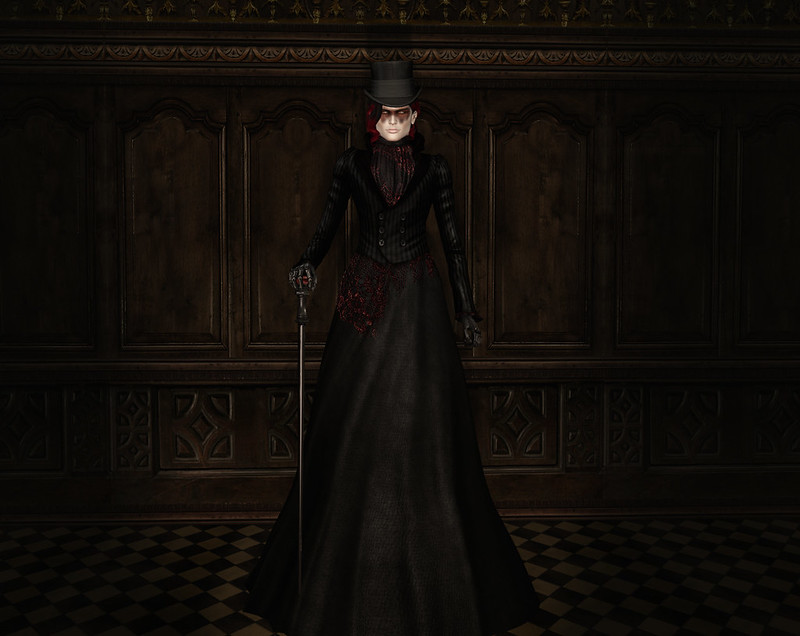 As before, it comes in a range of tonal packs, as well as a fatpack. For this look I went BOM again, with another old skin from Tableau Vivant, system eyes from Booty’s Beauty, and new BOM layer makeup from Zibska. 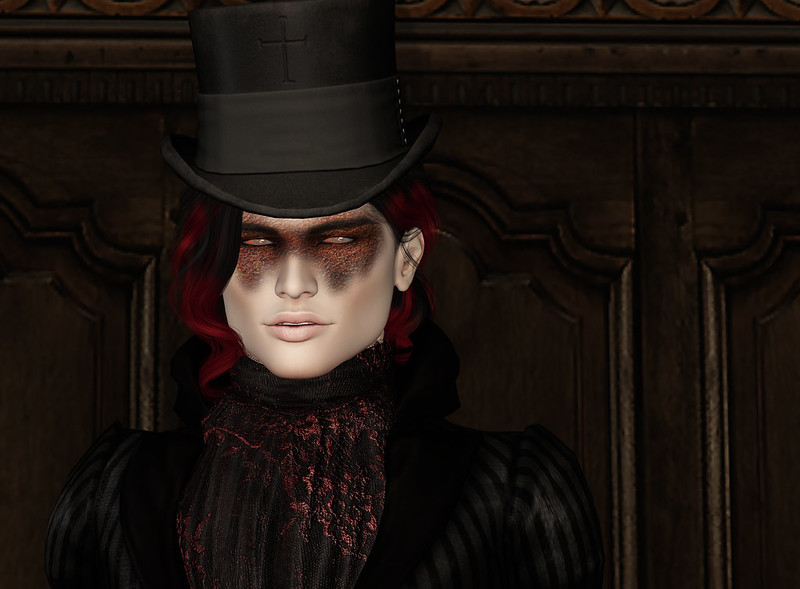 Dapper topper from ContraptioN, and hair from Truth. This gentleman may be in a dress, but doubtless there’s a sharp blade in the ferrule of that cane, so don’t get too close ;-) 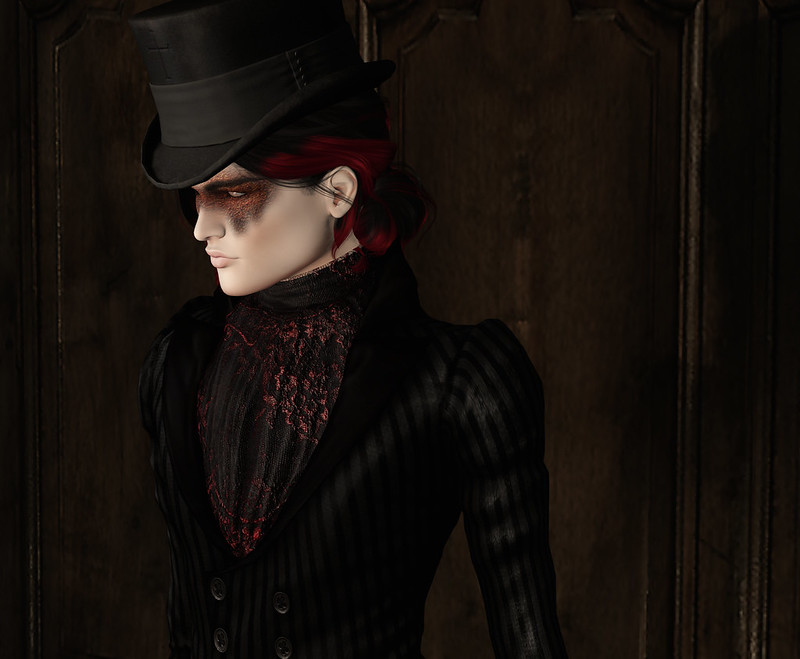 Credits for the above look

This site uses Akismet to reduce spam. Learn how your comment data is processed.