BOM Redux is a fun thing that I’ve been doing over on Flickr for some time, and I thought it’s about time that I brought it over to the blog. In short, it involves taking old system (and system/sculpt) looks, recreating them using BOM, and updating them with some more modern mesh pieces.

For years now I’ve been documenting on Flickr everything that I wear, and—since I’m also an SL packrat—I still have all of those things in my inventory, either in folders or in archive boxes. One or two items have sadly been lost to the Inventory Gods, but in the main I own enough similar items that I’m usually able to recreate an old look accurately. And, of course, the whole point of this being BOM Redux is that ‘redux’ means ‘revival’, so I’m updating certain parts of the look. This can be because the original system item just no longer works well with BOM (skin mapping is a prime candidate for this one), or I just can’t edit it to fit a mesh body without it looking really bad, or because I have a very similar mesh item that would look much better.

I start by going back through my Flickr, and finding an old look that makes me stop and think, “Hmm. That hair doesn’t look great anymore, but I’ve got that new mesh style by XYZ, and I could add ABC to it in place of…” etc etc. Then I dive into my inventory and start flinging stuff around.

My first BOM Redux comparison is a recreation of my old ‘Burning Bright’ Flickr look: Some of that old outfit came from a store that I used to visit frequently: Discord. That word now has a different meaning for most people, but back in the earlier days of SL it was a fantastic region (or possibly two regions, as I seem to recall?) that was host to a lot of great Japanese creators in SL. The main Discord store featured at one location a long bank of lucky chairs, and they were very generous with group gifts. After unpacking all of my archived Discord outfits, I found that most of them worked beautifully using BOM. The textures had clean, crisp edges (as you can see from the underlying jacket) and they didn’t suffer from blurring as so many old system textures do when used with BOM.

The accessories came from a store that has been in SL for many years, and is still a firm favourite for many of us: Bare Rose. Always a fantastic place to go for interesting outfits that are a little out of the norm from the rest of SL (and at great prices, too) Bare Rose was the kind of place where you could spend hours just scrolling your camera view up, down, and along the huge banks of outfit panels.

That multiple image style was one that I used a great deal in my earlier days of featuring SL fashion on Flickr. My intention was to display the outfit across several angles and poses, to show how it looked and how it moved. Looking back on that now I’ll admit that I do cringe a little bit, but it worked for the time, and every now and then I still do it (albeit with fewer images) when an outfit really deserves multiple views.

The original credits back then:

For some reason I didn’t credit my skin, which was one of the ‘Adam Crius’ ones by The Abyss. I loved the hell out of that skin, and wore it exclusively for several years. Sadly, though, it’s one that doesn’t map well onto a mesh head. For the BOM Redux I had to use a different skin. Nor (looking back at it now) did I credit that earring, but on examining it and poking at my memory it might have been a belly piercing by Sadalbari that I resized and moved onto my ear to become a single earring.

I also opted not to bother with the shoes, since the post I was creating this BOM Redux for was intended to be a sponsor feature for the backdrop. Not only that, but the pants that I’d used originally were one of the rare items that I’d lost to those nibbling Inventory Gods, and the ones I’d found as a substitute had completely different tight ankle cuffs instead of those flared out sections. The boots didn’t work with those ankle cuffs, and when I tried some of my knee-height male fit mesh boots none of them really felt right to me. So the Redux look was cropped above the knee. Just imagine that Skell is wearing some amazing tiger print knee boots ;-)

One crop of the original look: So what did I keep from this outfit? A surprising amount, actually. The jacket system layer and black ribbons from the two Discord outfits, all of the accessories from the Bare Rose outfit, plus the Fashism eyes.

Fashism? Who dat? Well they’re still around, but you’ll know them as IKON. Fashism was the first name that Ikon Innovia used for his store when he started selling his gorgeous system eyes. The store is still inworld and on Marketplace (although only his first ‘Sunrise’ collection is on MP), and you might still be able to pick up the original Fashism eyes inworld (although I’m not sure if he changed the name on each one to IKON). He never made the switch to applier eyes, but thanks to BOM we can now use those lovely old textures again on our mesh eyes.

I was surprised that—despite all the flouf and ribbons on this outfit—the complexity was lower than I thought it would be, at 91,000.

The updating was done primarily via the skin and hair. I switched to a current favourite skin (‘Izan’ by Vendetta) and one of Dura’s stunning new hairstyles that had a similar feel to it. I decided to add an extra detail in the form of the rings and chains from RealEvil, since my hands felt a bit bare and RealEvil’s gold textures feature a lovely pale shade that matched perfectly to the gold hues of the tiger print on the jacket collar and cuffs.

I switched out the old 22769 makeup (another name change; they now sell furniture as Bauwerk, but they made some fantastic male makup in years past) for a recent BOM release by VICEX#ADORED (I truly love those shadows and I pretty much live in them these days), added my usual ‘fierce af’ brows from IDTTY Faces, and my ever-present Catwa-rigged ear piercing set from Artificial Hallucination. 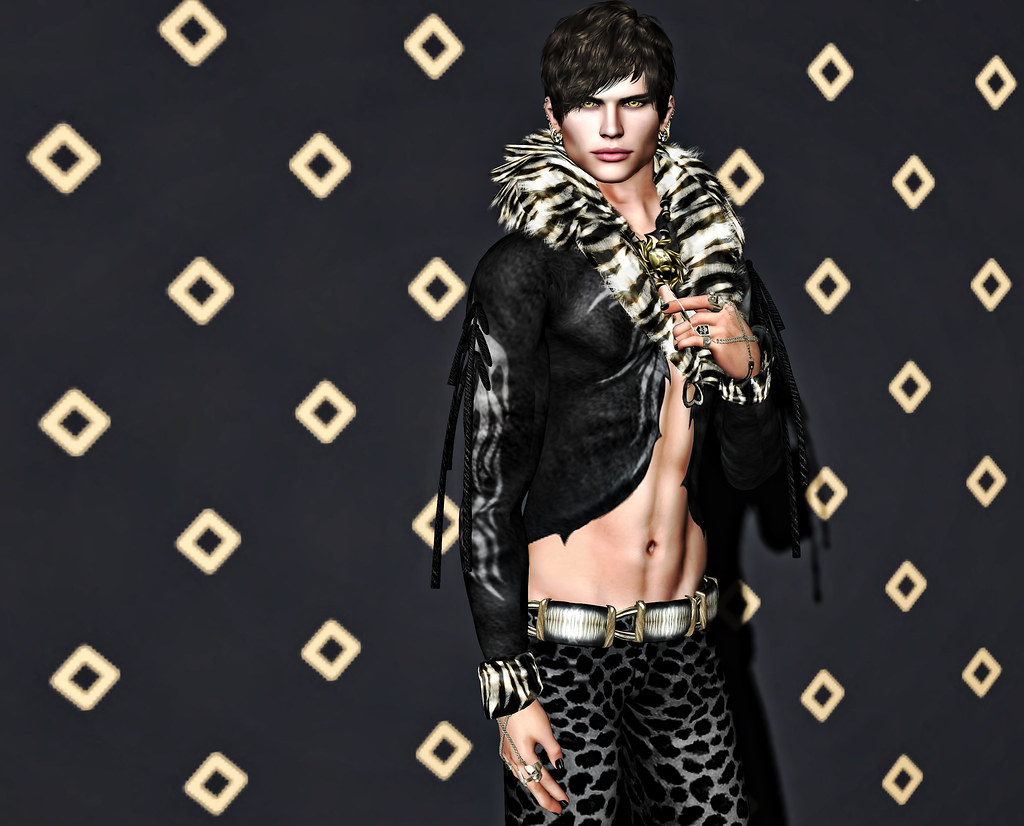 Full credits for the Redux version: