If you’ve followed me on Flickr, then you’ll know I’m rather fond of black. Very fond of it, in fact. But I do dabble in colour, on occasion. When I do, it tends to be either red, gold, or teal. (I once said Skell’s colours were, “Black, blood, and bone,” and I guess that’s not far off.)

Most of the outfits that I put together stem from one item, and in this case it’s this steampunk-style vest from Orquidea. I picked up one in a different colour during a past Steam Hunt, but on visiting the store I found it in several other colours. (Dig around while in Orquidea; it’s mainly female clothing, but there are a few choice male items, plus some unisex accessories.) Since the vest lining was red, the hunt was on. Occasionally I’ll need to shop for the finishing touch to an outfit, but this look came entirely from inventory (although, admittedly, the boots are a very recent purchase).

For pants, I know I can always count on Sn@tch. I think I own just about every pair of clothing layer pants that Ivey Deschanel has ever put out, and some of the female mesh pants, too (the small size works well on slim male avatars; just be aware that the high crotch means you have to metaphorically tuck…). I could have picked any number of pairs to put with the vest, but these Danger Brocade Jeans picked up the fancy scrollwork theme of the vest’s lining beautifully.

Fancy shadowy pics with detailed backgrounds look fabulous, but plain backgrounds show off clothes much better for detailed listings. This is how I roll, baby ;-) Focusing on accessories (if Skell is not accessorised, you’re looking at an imposter!) the ring was one hell of a lucky find. The World Goth Fair (still running, until the end of May) was a… pricey place for me, and one of the first stalls I visited was that of Sakide. Therein I found my doom: a gatcha machine containing multiple colours of this Black Cross Ring (you’ll find a close-up of it in the background image for the blog, too). I was willing to play the damn thing for a while to get the colours I wanted, but the gods of SL must have thought I’d been a very good boy, because on the very first play I got the rare, which happened to be the entire fatpack! Funny how little things like that can make your day inworld, eh? ;-)

The Rebel Trinity Bracelets are a Marketplace find, from RealEvil Industries, who have some absolutely awesome jewellery and accessories in their store. (Any ladies reading this, look ’em up on Marketplace, and you’ll find a couple of really nice freebies there. Hell, the guys should look ’em up, too. I bought those freebies, so expect to see them here some day!) I need to shop at Tonktastic a lot more, because the quality of their items is amazing. This beret is scripted to colour-change, and can run from full-blown macho military khaki to a (still-military, if you’re familiar with the Paras in the UK) red. The hair was a more fraught affair, as a beret in SL works best with no hair, just a decent hairbase. However, I did find this Heron style from CheerNo (not sure if it’s still available; I’ve had the damn thing for ages) and – with a lot of pulling around and judicious tweaking – it worked perfectly.

Skell’s skin is an old group gift (L$50 to join, at the time of writing this, and well worth it for the group gifts) from Tableau Vivant. Between TabViv, Birth, and Fruk, I’ve spent thousands on skins, and they’ve all been worth it. It’s rare to find Skell without makeup. Usually, it’s just eyeliner of some sort, but he’s equally likely to be roaming around SL in full slap. During a recent easter egg hunt, I came across the Kosmetika store, which is kind of a makeup Sephora inworld. I came out of the store all-but skint, but my makeup inventory folder was busting at the seams with goodies. These incredible Intense Cloud makeups from Blacklace Beauty layer well, and together with two eyeshadow layers from Jalwa and Pin Me Down (mmm, love that store name) they carry the red theme on. (Hot tip: I ended up sorting those eyeshadows into named colour folders, because with recent server-side baking it takes forever to preview layers on the avatar; much easier to try everything on once and shove them into colour-specific folders. Told you I was fuckin’ organised!)

Also in this shot is a tattoo from a new-to-me store that had some interesting items out at World Goth Fair: Half Deer. This Military Fashion Show tattoo comes in black and black/red. Accessorising on the skin counts just as much as it does in prims or mesh.

As for Skell’s ever-present piercings, the facial ones are old favourites from Pekka: the Esoteric Unisex Piercing (you’ll see me wearing this one a lot; it’s that good). It’s actually silver, but completely modifiable, so it’s red for the time being. And, in Skell’s ears, the Counterpart Ear Piercings in the gloriously bloodthirsty ‘seep’ shade, from HoD (another go-to piercing store for me). Lastly, a chance boot find. I was browsing Marketplace for something completely different and, while checking out Insanya, I discovered these Myx Boots. Yes, they’re ostensibly female (the foot looks slightly short from the front view on a male avatar, but they work surprisingly well) but the pack contains an unrigged pair and they come in a wide range of designs. I bought two pairs, but may go back for a couple more that caught my eye. Here, have some awesome music that sums up this blog (and the fashion industry in SL) perfectly: 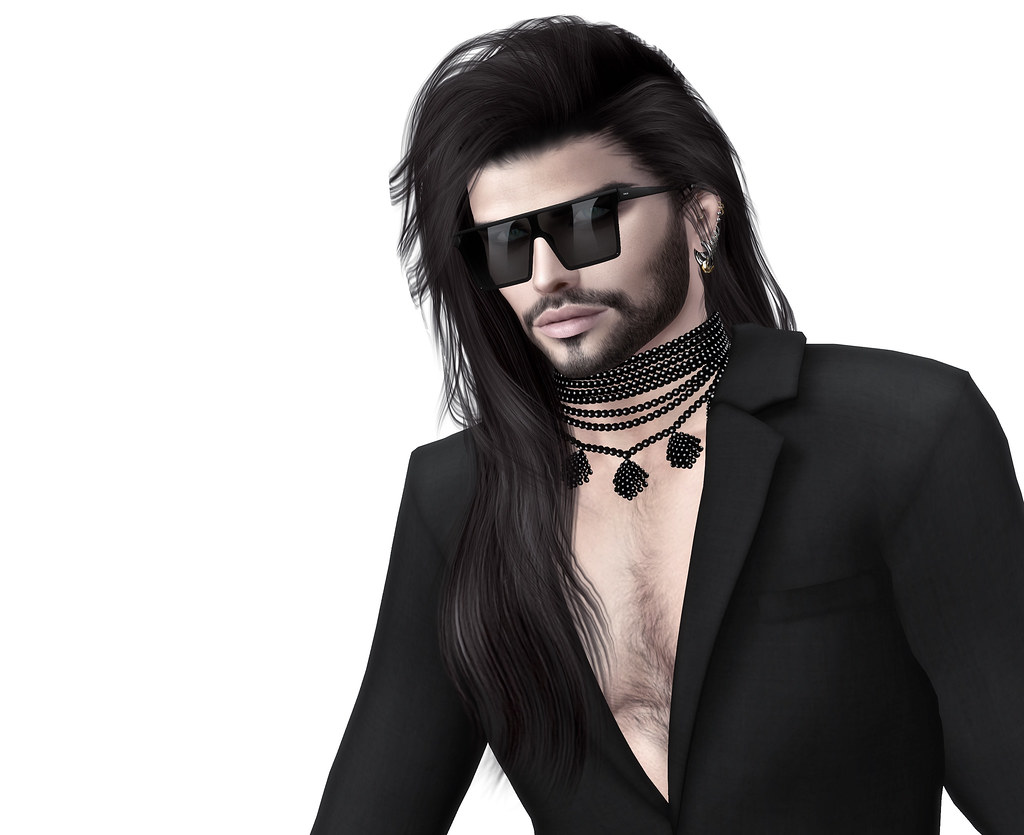 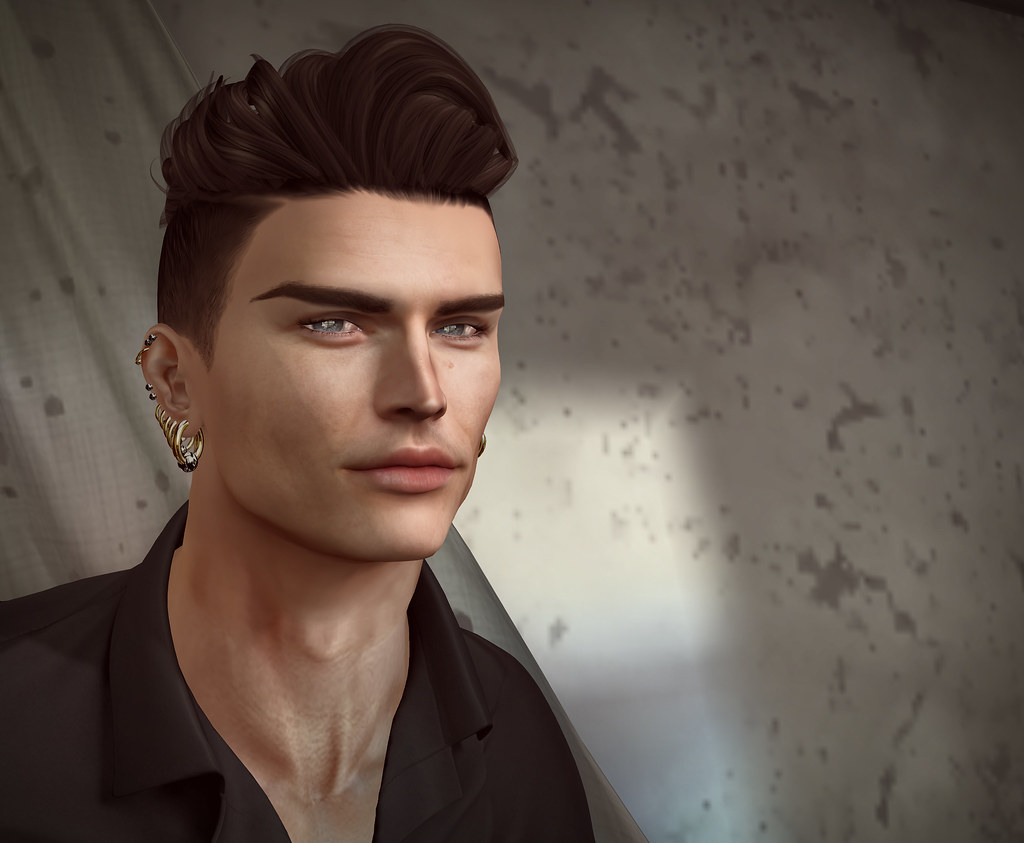 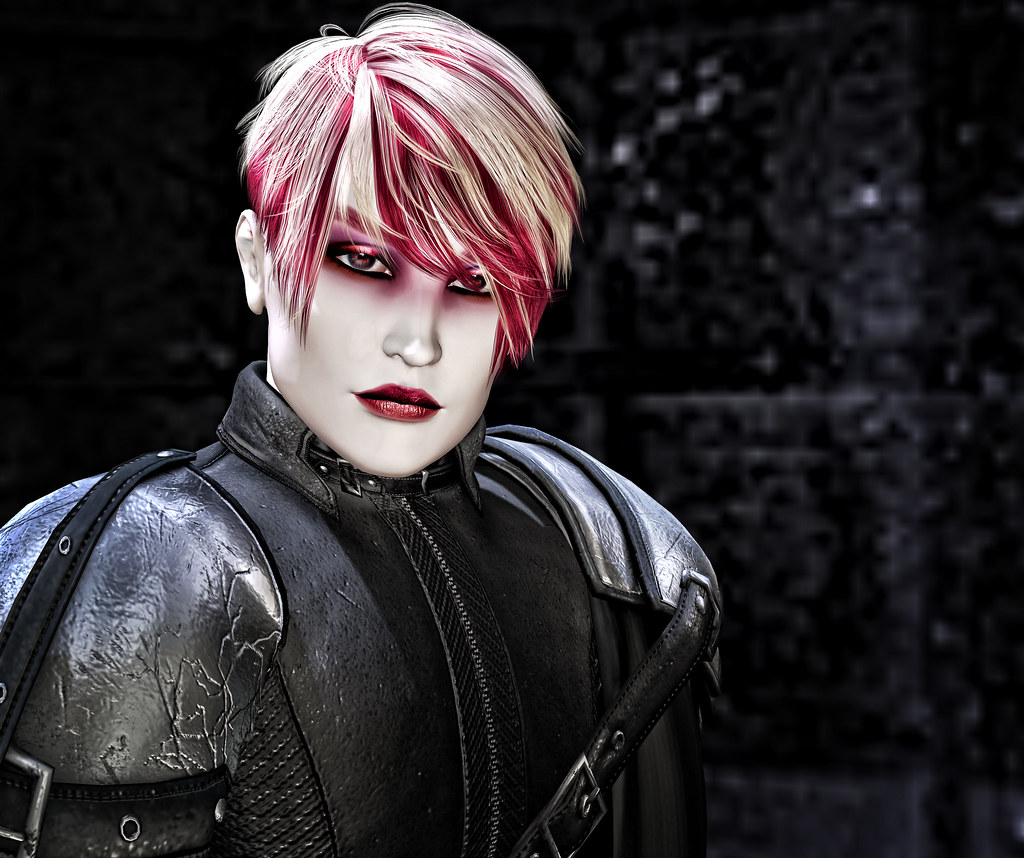 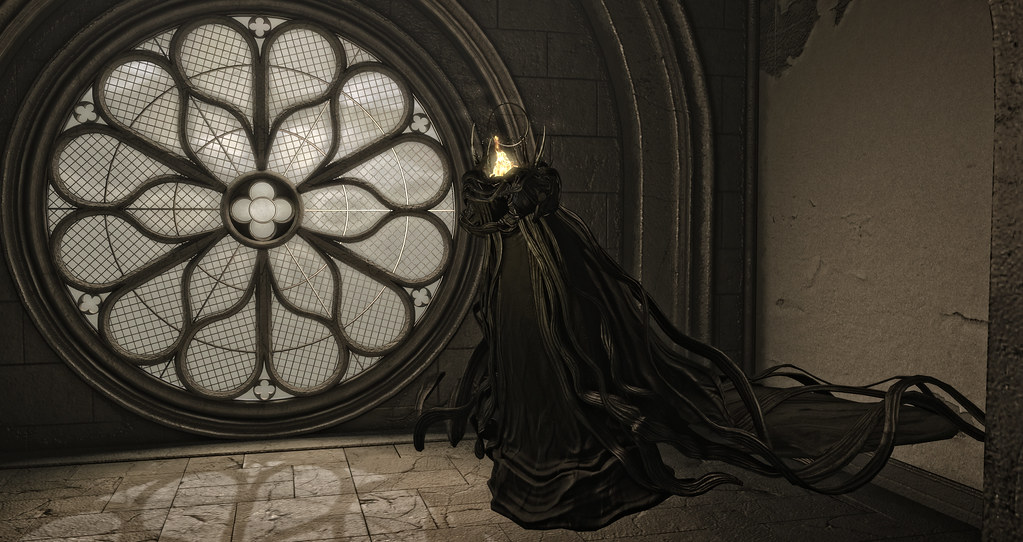 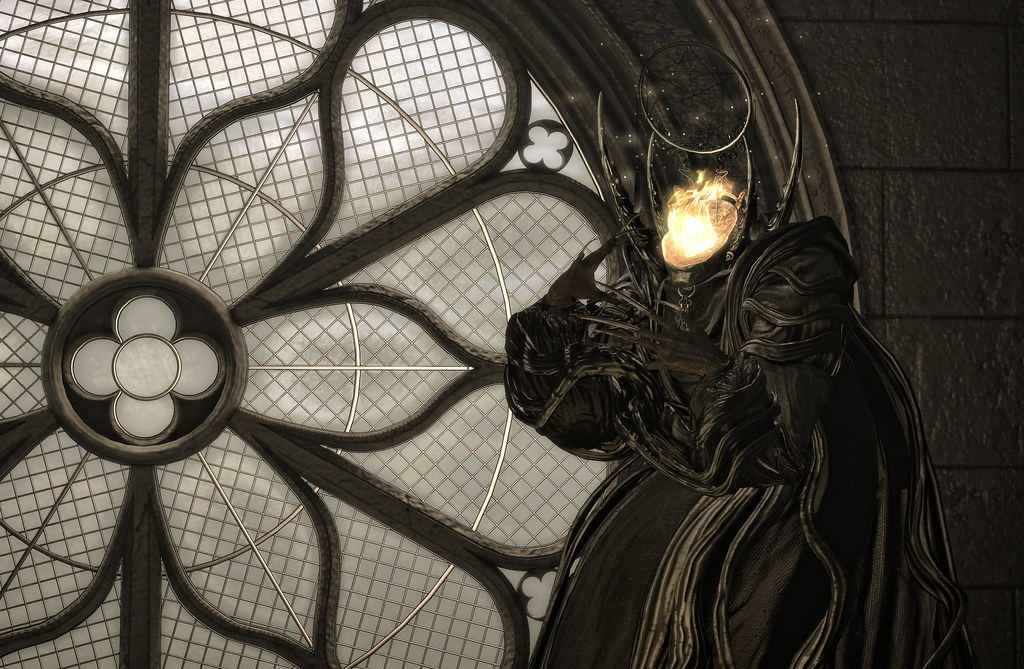 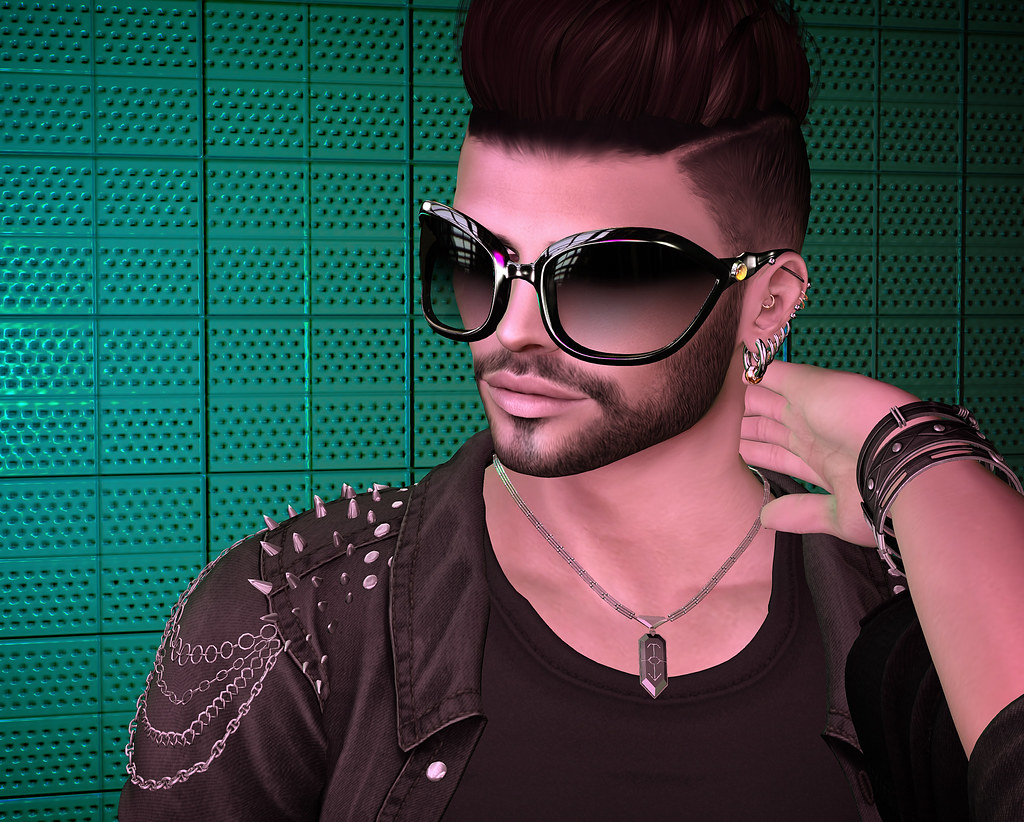 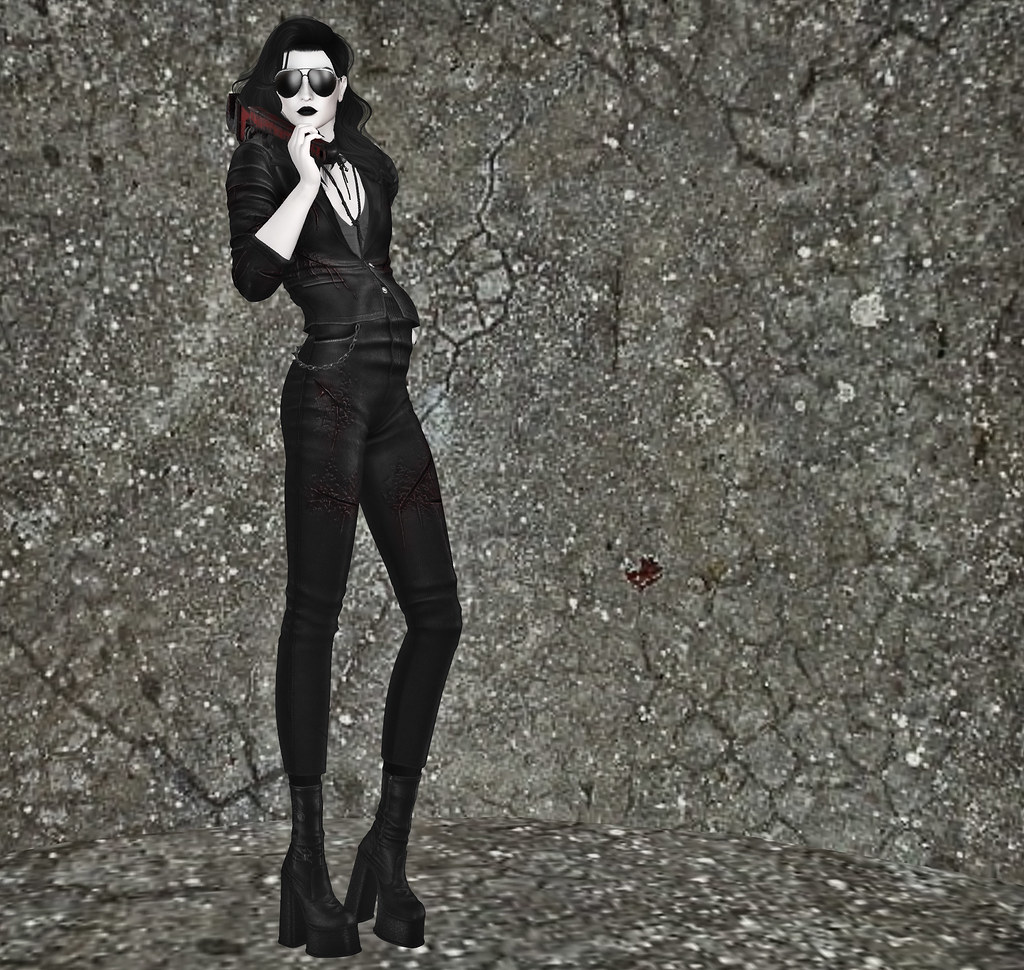